The author of this paper is Ma Yingying, a web front-end development engineer of Netease smart enterprise. In order to improve the quality of the content, there are revisions and changes from time to time.

In terms of disconnection and reconnection, the response speed of reconnection will seriously affect the “immediacy” and user experience of the upper application. Imagine if the wechat network can’t immediately sense the recovery of socket connection and send and receive instant chat messages after opening the network for one minute, is it a crash?

Therefore, how to perceive the network changes more quickly and quickly in the complex network environment, and quickly restore the usability of websocket becomes particularly important. Based on the author’s development practice, this paper will share how websocket can realize fast disconnection and reconnection under different network conditions.

*Content comments:The content of this paper is not big, but it is dry goods, practical and popular. It is recommended to read it in detail. Although websocket is discussed in this paper, the idea can be extended to the similar technologies based on TCP protocol.

This article has been released in official account of the “instant messaging technology circle”.

Due to the limited space, this paper will not go into the technical details of websocket. If you are interested, please study systematically

3. Get to know websocket quickly

Websocket was born in 2008 and became an international standard in 2011. All browsers now support websocket (see quick start for beginners: a brief tutorial on websocket). It is a new application layer protocol. It is a real full duplex communication protocol specially designed for web client and server. We can understand websocket protocol by analogy with HTTP protocol. 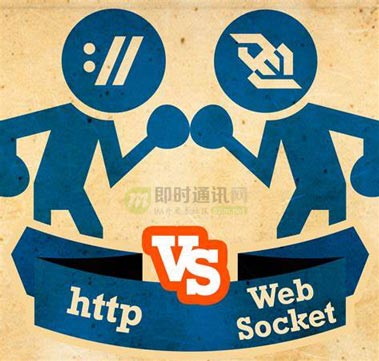 (picture quoted from “websocket explanation (4): the relationship between HTTP and websocket (Part 1)”

Their differences are as follows:

Their similarities are as follows:

The relationship between the two and TCP 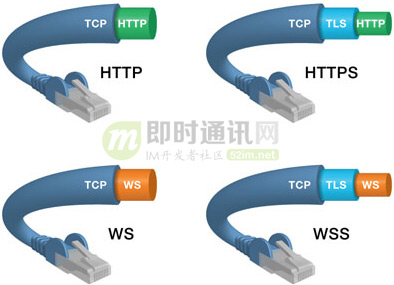 (image quoted from “getting started: a brief tutorial on websocket”)

For the relationship between HTTP and websocket, please read:

First consider the question, when do you need to reconnection?

The easiest thing to think of is that the websocket connection is broken. In order to send and receive messages, we need to initiate a connection again.

But in many scenarios, even if the websocket connection is not disconnected, it is actually not available.

For example, the following scenario:

The WebSockets in these scenarios are not disconnected, but for the upper layer, there is no way to send and receive data normally.

Therefore, before reconnection, we need a mechanism to sense whether the connection is available or not, whether the service is available, and to be able to quickly sense, so that we can quickly recover from the unavailable state.

Once you feel that the connection is not available, you can discard the old connection, discard it and disconnect it, and then initiate a new connection. These two steps seem simple, but if you want to achieve fast, and not so easy.

With these questions, let’s take a closer look at the three processes

Scenes that need to be reconnected can be subdivided into three categories:

For the first scenario:It’s very simple. The connection is directly disconnected. It must be reconnected.

For the latter two: whether the connection is unavailable or the service is not available, the impact on the upper application is that instant messaging can no longer be sent and received.

Therefore, from the above point of view, a simple and crude way to sense when reconnection is needed is through heartbeat packet timeout: Send a heartbeat packet. If the server does not receive a packet back after a certain period of time, the service is considered unavailable, as shown in the left side of the figure below (this method is the most direct). 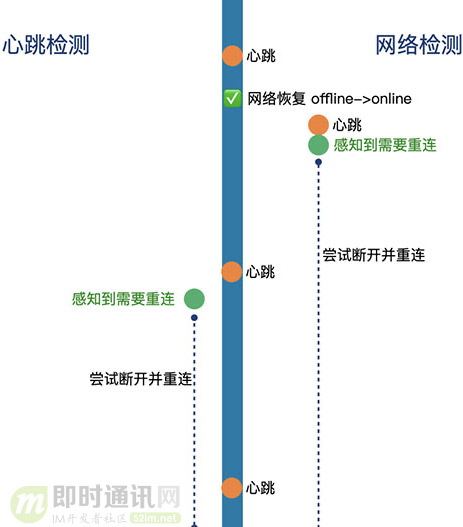 If you want to quickly sense it, you can only send more heartbeat packets to speed up the heart rate. However, if the heartbeat is too fast, it will consume too much traffic and power on the mobile terminal. Therefore, this method can not achieve fast sensing, and can be used as a cover mechanism for detecting connections and services.

Therefore, when the network is disconnected from the connection, the next connection can be judged immediately by sending a heartbeat packet. If the heartbeat packet from the server can be received normally, the connection is still available. If the heartbeat back packet is not received after the waiting time-out, the connection needs to be reconnected, as shown on the right side of the above figure. This method has the advantage of fast speed. It can sense whether the connection is available at the first time after the network is restored. If it is not available, it can quickly recover. However, it can only cover the situation that the websocket is not available due to the change of application layer network.

Therefore, we can combine two options:

In this way, in most cases, the application communication of the upper layer can recover quickly from the unavailable state. For a small number of scenarios, there is a timed heartbeat as the background, which can be recovered in a heartbeat cycle.

The purpose of this is:

If the client wants to disconnect the old websocket, it can be divided into two cases: the websocket connection is available or not.

The details are as follows:

The process of time-out disconnection is relatively long. Is there any way to quickly disconnect?

This method is equivalent to trying to disconnect the old connection. If it is not possible to do so, you can directly abandon it, and then you can quickly enter the next process. Therefore, you must ensure that the old connection has completely failed in business logic.

Students with IM development experience should understand that when reconnecting due to network reasons, it is absolutely impossible to initiate a new connection immediately. Otherwise, when there is network jitter, all devices will immediately connect to the server at the same time. This is no different from a denial of service attack caused by a hacker who consumes network bandwidth by launching a large number of requests It’s a disaster.

Therefore, when reconnecting, some backoff algorithms are usually used to initiate the reconnection after a period of delay, as shown in the flow chart on the left.

What if you want to connect quickly? The most direct way is to shorten the interval between retries. The shorter the interval is, the faster the communication can be restored after the network is restored. However, too frequent retrying will cause serious consumption of performance, bandwidth and power.

How to make a better balance between them?

The second scheme mentioned above, as shown on the right side of the figure above, will increase the reconnection interval with the increase of the number of retries. The combination of these two methods is more reasonable.

In addition, it is also possible to adjust the interval according to the possibility of successful reconnection in combination with the business logic. For example, when the network is not connected or is applied in the background, the reconnection interval can be adjusted a little more, and so on, so as to speed up the reconnection.

8. Summary of this paper

Then it analyzes how to quickly complete these three steps in different states of websocket and different network states.

The specific summary of the process is as follows:

The above is my technology sharing about how to realize websocket fast reconnection. Please leave a message to discuss with me.

[2] Quick start for beginners: a brief tutorial on websocket

[3] Detailed explanation of websocket (4): the relationship between HTTP and websocket (Part 1)

[4] Detailed explanation of websocket (5): the relationship between HTTP and websocket (Part 2)

[5] Detailed explanation of websocket (6): the relationship between websocket and socket

Appendix: more information about instant messaging on the web