Recommendation system based on coupling network

Recommendation system based on coupling network

When we pick up our mobile phones to call our family, friends or colleagues, we unconsciously participate in the process of social network formation; when we board the high-speed rail or the plane, we can enjoy the convenience brought by the traffic network; even when we lie in bed and do nothing, the neurons in the brain will form a huge complex network to transmit to each other Signals that help us think or act. Complex network is a theoretical tool that abstracts all kinds of large-scale complex systems in the real world into networks for research. A large number of complex systems in nature can be described by various kinds of networks.

A typical network is composed of many connecting edges between nodes, in which nodes are used to represent different individuals in the real system, while edges are used to represent the relationship between nodes. Usually, if there is a certain relationship between two nodes, one edge is connected, otherwise there is no connection, and the two nodes connected at the edge are regarded as adjacent in the network. In order to facilitate the calculation, we usually use adjacency matrix to represent the network. According to the different types of network edges, the network can be divided into undirected network, directed network and weighted network. The corresponding adjacency matrix is shown as follows:

Regular network is the simplest network model. In this type of network, the connection between any two nodes follows the established rules, usually the number of neighbors of each node is the same. 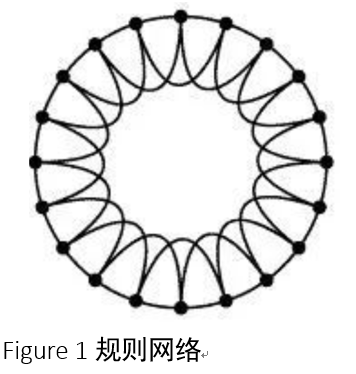 It is completely random whether there are connected edges between nodes. 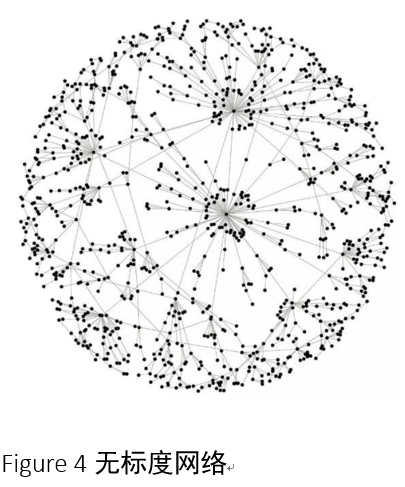 Background of recommendation system based on complex network

Link prediction refers to how to predict the possibility of connection between two nodes in the network that have not yet generated a connection edge through known network structure and other information. The prediction of existing but not yet discovered connections is actually a data mining process, while the prediction of possible future connections is related to the evolution of the network. Link prediction can be applied to e-commerce websites. If the goods in the e-commerce website are regarded as one kind of node and the user as another kind of node, if user a purchases goods B, a and B will form a connecting edge. This edge only exists between different types of nodes and becomes a binary network, and the chain path prediction problem in the binary network is actually a kind of recommendation system.

Now let’s briefly introduce an article of recommendation system based on complex network, information filtering via based random walk on coupled social
Network》。 In this paper, the user’s social network and the user commodity binary graph network are coupled, and the user’s social information and commodity preference information are integrated to recommend commodities to users.
Coupling social network (CSN) includes coupling nodes (users), which form leader follower relationship in social network layer and collection relationship in information network layer. The figure below is a simple schematic diagram of a coupled social network, with circles representing users and squares representing objects. The first half is the social network of five users. The $U4 $refers to the connection of $U5 $. The $U4 $is the follower of $U5 $. There is a certain degree of similarity between them. The second half is a binary network. There is a connection between the object $O5 $and the user $U5 $, indicating that the user $U5 $has $O5 $. If there is only the second half of the network, we can not recommend the product $O5 $to the user $U4 $. When we consider the similarity between $U4 $and $U5 $in the social network, we can recommend the object $O5 $to the user $U4 $. Next, let’s explain how this method works in the recommendation system. 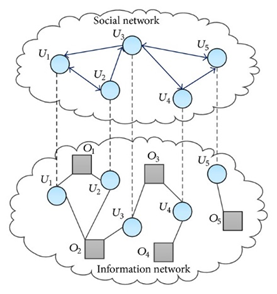 The two public data sets of epicions and FriendFeed contain a social relationship data set and a scoring data set. The following table describes the network corresponding to the dataset. Taking epinations as an example, a part of data is randomly selected for analysis. The sampling data scale is 4066 users, 7649 objects, 154122 user object connections (collections), and 217017 social network connections. The network density is 5×10-3.

4.2 effect of parameters $\ lambda $and $t $, on experimental results

$\ lambda $is the allocation proportion of resources in social networks and bipartite graph networks, and $t $is the walk step length. The following figure is measured by sorting points. The colder the value color is, the better the effect is. It can be seen in the figure that when $$t = 3 $$, the better the prediction effect is. When $\ lambda = 0 $, the prediction effect only depends on the bipartite graph network. With the increase of $\ lambda $, the information of social network is gradually considered.

The following table shows the effect comparison of the model with MD (mass diffusion) model and UCF (user based CF) model when the predicted length is $l = 20 $.

This project has been implemented on Mo platform. Remember to fork:https://momodel.cn/explore/5d…

Mo AI ClubIt is a club initiated by the R & D and product design team of the website and committed to reducing the threshold of AI development and use. The team has experience in big data processing and analysis, visualization and data modeling, has undertaken multi field intelligent projects, and has the ability to design and develop the whole line from the bottom to the front. The main research direction is big data management analysis and artificial intelligence technology, which can promote data-driven scientific research.

At present, the club holds offline paper sharing and academic exchange in Hangzhou every two weeks. I hope to gather friends from all walks of life who are interested in AI, constantly communicate and grow together, and promote the democratization and popularization of AI.

This article is forwarded from the professional laravel developer community, original link: https://learnku.com/laravel/t… In this article, we’ll learn how to use JWT authentication to build restful APIs in larevel. JWT stands for JSON web tokens. We will also use the API to create full-featured crud applications for user products. When using cross platform applications, the […]